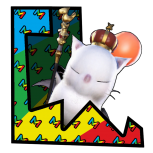 By Moogle, September 14, 2019 in Community Announcements